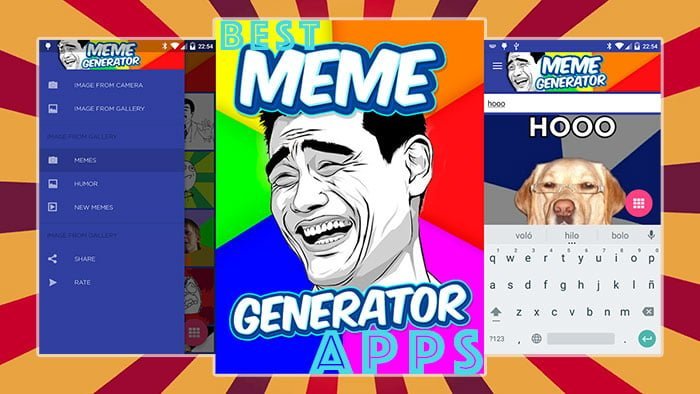 For anyone frequently using the Internet, it’s virtually difficult to be unaware of memes. Meme culture seems to have taken over the world and they are regularly discovered popping up over Facebook, Twitter, and other social networking feed. Many are humorous ways of representing an idea, so memes have turned into a well-known method for conveying a message without the needs for a ton of words. It is easy to share memes that you come across but it is way more enjoyable to create your own!

That’s where meme generator apps, come in and there are plenty of them available on the Google Play Store. It has to be said that some are much better than others and they come and go with alarming regularity, but we’ve looked at numerous examples and gathered together the best meme generators for Android at the time of writing.

A large number of these apps are free while some include in-app purchases. Some of these meme generator apps also offer a paid version that either remove ads or add further features. You can use the following apps to start your own meme culture and spread them with companions, family, and obviously the wider community. Who knows, maybe one of your own memes will go viral!

This ZomboDroid app is extremely highly rated on the Play Store and it is easy to see why. You will soon be having a lot of fun making memes that can be easily shared via a wide variety of outlets including Facebook, Twitter, WhatsApp, Instagram, Email, Dropbox, Snapchat and many more. You can start with a choice of more than 700 memes across multiple categories with quick scrolling and optional grid view, or use your own pictures for a custom meme.

Further features include fully flexible text size and color with multiple fonts available and it is simple to crop pictures, add borders, and add up to 10 captions or use stickers. You will also benefit from regular additions of new memes and the fact that there are no watermarks on your memes is a bonus. The developers of the app also state that they are working on a meme voting, uploading and sharing platform that will be coming at a future point.

We like the fact that both the free and paid versions of the app avoid in-app purchases. The free version contains ads but you can opt for the paid version to avoid those. Overall, this one is difficult to beat and it is a pleasantly laid out solid and stable app that makes creating memes really pleasurable.

Mematic – Make your own Meme

Totally free to download and use, Mematic from Trilliarden has ton of offer although the number of ads can be a pain. If you can put up with that the app will enable you to make your own memes in no time using your own photos or a choice of images. Only a couple of the popular memes available are Creepy Willy Wonka, Drunk Baby, Batman Slaps Robin, Will Smith What, Grandma Finds the Internet, Gordon Ramsay, and First World Problems. Then you can add captions, save to your album.

Meme Generator from Little Bear Production gets a big plus as it is not only a free app but there are NO ads! You can rapidly create your own memes using pictures from your gallery, and crop and zoom in on images to select the section you want, with multiple text categories available. We loved the Smart Text Positioner that comes up with the best way to position your typed text on the meme (or you can choose from pre-written memes), and the live preview of your finished creation.

There is a lot to enjoy with the responsive MemeDroid design tool from Novagecko, so it had to be included in our selection of the best meme generators for Android. The focus here is well and truly on fun and humor, and if you have friends who want to join in that is even better. The app adds new memes day by day to keep it relevant, and you can share your opinions by voting on memes to generate the best-rated meme of the day, week, or month. Obviously, this means that others can judge whether you are as hilarious as you think, or not as the case may be!

Some of the meme templates available include Evil Toddler and Overly Attached Girlfriend, and the app supports multiple languages including English, French, Italian, Spanish, and Russian. The paid Pro version of the app removes ads and includes an offline store.

As its name suggests, this app enables you to make comic style memes by applying comic style filters to your images. You can add text to your memes and photos and enhance them with an a boundless number of stickers, emotes, speech bubbles, and frames, to express your message even better. There are also multiple font choices and you can adjust the text size, color, and style, and if you want to scale and rotate any element you can do so using simple pinch controls. We noticed that some users were a little confused by the interface but a recent update has made improvements in this area.

Our picks of the best meme generators for Android have various features and functionalities but all are pretty simple to use. Depending on what you are looking for you are probably going to find that at least one of them is one that you will use again and again. You can be sure you will entertain yourself when you create your own memes. Whether you will also entertain your friends and family remains to be seen! Let us know which of these apps is your favorite by dropping a comment in the usual way.